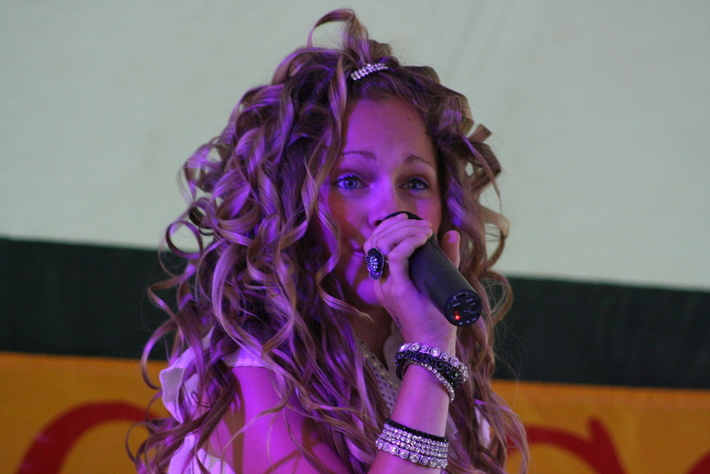 On June 12, 2010 I competed in Big Rapids, Michigan in the local Colgate Country Showdown Talent Competition which is an open event including all venues and ages and WON!! I continued on to compete in the next stage of the showdown June 24, 2010 for the Michigan State title where I placed third with a broken arm which I acquired the night before the contest. I have just signed up again for this year! Check out the web site. http://www.countryshowdown.com

While I love to perform and compete I also love to donate my time to many charitable volunteer events. This year I performed with the 'RESPECT' tour with Community Living Chatham-Kent where I performed for approximately 40 schools and thousands of students in Chatham-Kent and it's surrounding area. Here is a note from a coordinator of the RESPECT Tour:

"From my experience with Brooklyn she is very professional for her age, and takes her craft very seriously. She is a natural on stage and her performing in our RESPECT Tour for 2010 was magical. She added that star quality element that was needed to relate to the kids as well as parents in the audience. I would recommend that anyone looking for a vocalist with not only a great voice, but that star "swagger" and presence that Brook would fit the bill. I have worked with many promoters all over the world including Halifax and the Honolulu market bringing in major acts for concerts. Brooklyn could certainly end up on a major stage someday in my estimation. It was my pleasure to get her some exposure here in the community and hope that it will be used as a confidence booster and stepping stone to bigger & better things in her bright future.

Remember me when you hit the BIGTIME Brooklyn!

This year I was fortunate enough to be asked to perform in Niagara Falls for the kick off of the Festival of Lights. I performed three sets of music at the gala dinner for over 400 people. My debut performance was amazing. I received accolades from many people who attended the gala. Here are some of the comments:

"I first heard Brooklyn sing at the Winter Festival of Lights 2010 Kick Off Party on November 6, 2010 in Niagara Falls Ontario. Her voice range and comfort level as a performer totally amazed me - especially considering her age! The fact that she could sing everything from well-known rock and roll and blues hits from the sixties and seventies to current popular hits, and inject these songs with her own personal style while keeping true to the original artists rendidtions, is truly a joy to see. This young lady has a tremendous gift and I'm sure we'll be hearing her name and watching her continue to grow and hone this talent for many years to come."

"As a board member of the Winter Festival of Lights and an elected official on Niagara Falls City Council and some one who has been around the event industry for a number of years I have to say Brooklyn definitely captivated the attention of the room at our opening event sponsorship recognition night. Brooklyn is a natural, a very powerful voice for a very young lady and is very confident while on stage. Look out Justin Beiber!"

I was asked to perform again next year at the Festival of Lights on the big stage!

I will be singing July 8, 9 and 10, 2011 for Canadian Veterans National Rendezvous in Niagara Falls Ontario. There is expected to be 10,000 veterans from Canada and the U.S. and their families attending along with the Prime Minister and other political leaders. It should be amazing!!

Thank you for reading about my short career in entertainment! I'm having so much fun!

if yhuu like, could yhuu please check out my videos and pictures!

i'm shooting a music video for an original song ''Someone'' next month so stay tuned!

Viking Quest said…
hey. nice to meet you. hows it going? cool page. and nice profile pic. im a singer/songwriter/recording artist/music producer. you seem really cool and i like your style.

George Mercer said…
Hey Brooklyn,  well done on your success.  I have a rubbish connection at the moment but will check out your videos a little later.  I'm a vocalist too - see my profile.  Best of luck here. Cheers.  George

Suzi Oravec said…
Thank you sweetheart! excited to watch your videos ;) Best of wishes with everything!! Rock on, gorgeous!

Drew Vivian said…
Great profile! An keep up the great singing too!

Prianka Thomas said…
nice vids, can you look at mine please x :)

Holly Southgate said…
haha, like yours too! thanks x

Keep up the good work.

Thanks for the add.