Rebecca Black is Back 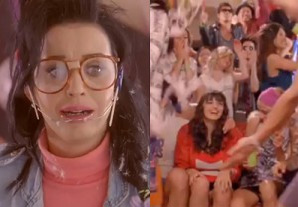 Great news for the fans of Ark Music Factory's "Friday" and Rebecca Black. Katy Perry has jumped on the Friday bandwagon with her own Friday inspired song and not only that Rebecca Black makes a cameo appearance in the video.

Katy Perry released a teaser video for her 80's flashback Friday inspired music video called " Last Friday Night (TGIF)." The video spoof is not only meant to be funny and fun, but is no doubt looking for some controversy. Parents might have a lot to say about this video because it shows a teenager having a Janet Jackson style "nip slip" and drinking too much, then throwing up.

In the video Katy Perry plays her alter-ego Kathy Beth Terry, a nerdy looking school girl who gets a little crazy at a school party. One example is someone spikes the punch and "Kathy" ends up throwing up in a roller skate.

Katy Perry tweeted "Last Friday Night is a total vapid, slut jam." Not sure what that means exactly but Kathy Beth Terry has been taken viral with a Facebook page that already has 95,000 friends.

Rebecca Black's cameo appearance makes this video all that much more funny (or odd). At least it seems Rebecca Black has figured out which seat to take.

Side Note: Perry has also performed the Friday song live, and YouTube has the performance in Melbourne, Australia. Friday fans can watch the main video below!

I'm not a fan of the lyrics in "Last Friday Night" but I do understand that Katy intended them as an illustration of how NOT be behave, and I hope all her young fans understand that too!

Always happy to hear about good things happening for Rebecca Black.  She handled the "Friday" controversy very well, in my opinion.  All the Best to RB and ARK!

Comment by Vicki S Owens on June 10, 2011 at 1:29pm
Katy, you are a fascinating artist. You can slow down Friday and make it fun and interesting. Vicki