Winds Of Plague, the Symphonic Deathcore/Blackened Death Metal group from California didn't disappoint with their release of The Great Stone War last year.

I'm not the kind of person to glorify the "-core" scene of today. thats saying something about how much i REALLY LIKE THIS ALBUM.

Its laid out like a story in the form of a "concept album." If youve listened to Coheed and Cambria ( i feel sorry for you if you have, but to each their own ) you would know this idea.

The album begins with a spoken word track detailing the basic story (forces of good and evil, blah blah blah) its all kind of cliched, but the delivery is spot on.

After that,the album goes into its musical portion, with deep, gutteral growls and powerful screams from Johnny Plague, the frontman of the group.

The guitar work and bass playing are above standard fare for this album, think Whitechapel if they were on steroids combined with the speed of a band like Cannibal Corpse or Goatwhore.

like every good story, it starts out amazing, and then it gets a little bland in the middle of it. But thats more than made up for in terms of lyrical prowess later in the album

See? sounds pretty awesome, dont it? and speaking of the later part of the album, there is one track that stands out to me in particular, its entitled "Classic Struggle" the key feature in this track is the Pipe Organ. yes, you read that right. a pipe organ. its only for the one track, and it is AMAZING. i see it as serving as the climax to the story, and the track definitely fits that profile.

The best feature of the album is the way most of the tracks layer into each other. its not very noticable when listening on an iPod or whatnot, but if you have the CD (LIKE YOU SHOULD ALWAYS DO, SUPPORT THE MUSIC INDUSTRY) you can really tell.

The album ends with another spoken word track, with more perfect delivery, and its a great way to end the album.

Did i mention the album art? because its the best ive seen in a long time. 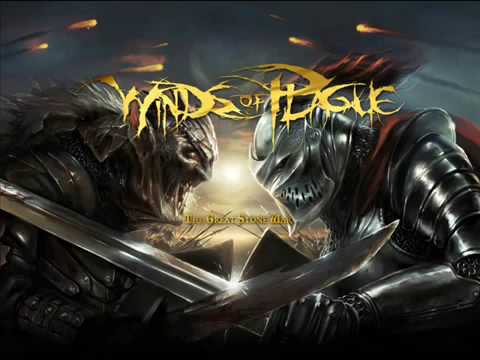 Is that not epic? because it totally is.

If you like acts like Dimmu Borgir, Goatwhore, Cannibal Corpse, and other Deathcore, you will LOVE this album.

i cannot recommend it enough.